Sloths are not lazy! 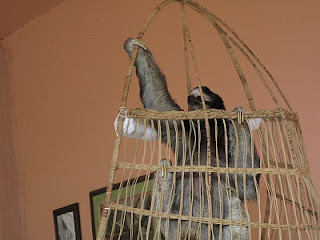 January 3, 2009 -- I didn't post at all in December. Hope everyone had a great New Year! I visited the Avarios Sloth Sanctuary near Cahuita, Costa Rica where sloths are rescued, especially babies who have lost their mothers. I fell in love with Buttercup, the 19-year resident of the Sanctuary which is also a hotel and restaurant. Buttercup stays in the hotel's restaurant hanging from a hanging basket. She moves so very slowly and apparently sloths sleep 18 hours a day. I will post a photo of her but it isn't very clear. We aren't allowed to use flash which is understandable. The babies are also bottle fed at a table in the restaurant. Sloths don't carry diseases and are very clean. Their website is www.slothrescue.org/ which I can't get right now because my Internet connection is down. Electricity is very fragile here in Costa Rica. I don't even know if this will get posted or not. That's why I wrote about books and how important they are. They still are. We need to keep publishing them, and distributing them to countries where children don't have them.
Sloths are the most misunderstood mammal we have. They live mostly in trees, the three-toed kind are vegetarians but the two-toed sloths are omnivores. The three-toed (like Buttercup) are very gentle and could be a pet. The two-toed are feisty and unfriendly. I thought that was a comment on diet perhaps!! Don't know. I'll write more about them later. Our guide did say that they stay in the tree for a week and only come down once to eliminate. Have to check that one out for sure. The beauty to me was watching Buttercup move at such a sloooowwwww pace. Gorgeous!!
Posted by turtlelearning at 11:45 AM 2 comments: