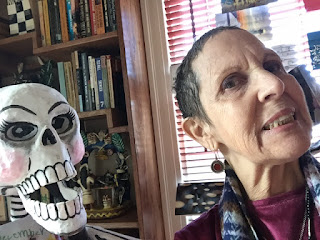 Have not felt much like writing these past few months.  Still physically recovering from the effects of chemo -- never really goes away 100%.   So glad to finally have the cats back at home. They are affectionate but mostly mischievous.  They climb up everything now - and Red eats the leaves of my plants.  Slim loves to attack bags of cat food before they are open.  Today they played hide-n-seek in the covers of my bed.

I started this December 29 to look back at the year and try not to mourn about the year ahead.  But today I got even more devastating news that my friend Becky Borges has died.  She was a dear friend, and although we weren't that close, I felt as though I understood all that she had suffered being diagnosed with stage 3 breast cancer several years ago.  She was sent to City of Hope where they used stem cell therapy to cure her.  I know I am getting the details wrong and hope I can read about it from someone.  She did well for quite some time, but the cancer had metastasized and they were unable to make her better in this last year.

This year 2016 I have lost four friends to cancer. Not just acquaintances, but friends, people I admired and loved.  And then I was diagnosed this year as well.   All four people who died were so special, in that they were people who gave of themselves for the betterment of others.  They often put others before their own needs as well.  I sometimes wonder if that's why some people get sick -- that they spend more time taking care of others than themselves. 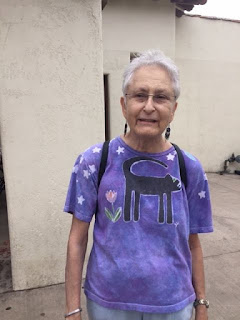 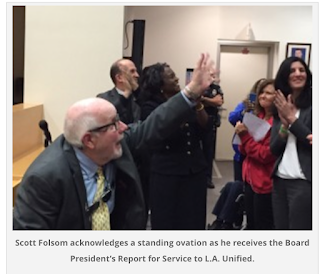 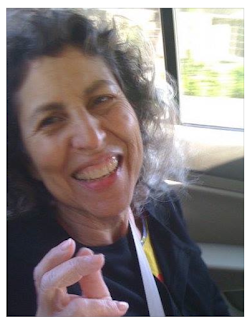 A little about Becky Borges who just died (I had exchanged texts with her in November!):  Becky was a twin - she had a twin brother, three sisters, another brother I believe. My details are sketchy because my memory isn't good.  I know she had a loving family -- spent all her holidays with her family.  One sister was a teacher as she was.  We met because Becky was the teacher librarian at Wilson High School.  She was beloved by her school as well.  When she got sick, many people gave her their sickness hours so she could retire with enough money and benefits.  Her students loved her - you could see how carefully she treated all of them, never a harsh word, a homemade cake for a birthday,  a warm fire in the library where they could feel cozy.  It seemed she treated each person as if they were special, were also family, as she would want to be treated. 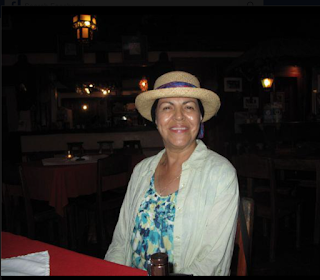 Our second to the last year in Costa Rica - 2012 - Becky and her husband Tony came to visit. I was thrilled!  They stayed at two lovely hotels -- one right next door to us.  I think they had a good time although I was worried that they were used to more high end vacations than we.  Our digs were inexpensive and our travel wasn't luxurious.  They didn't feel there was enough local food or art -- but I think that was because Puerto Viejo de Talamanca in Costa Rica is a very mixed up place. The influences are many -- Afro-Caribbean being primary, indigenous Bri Bri as well.  There isn't really a "local" feel to it -- much more cosmopolitan in some ways (Europeans from all over find their way to it) and also more poverty stricken.   In the above photo we were eating at Maxim's at the end of Costa Rica right on the border with Panama - a lovely fish restaurant. 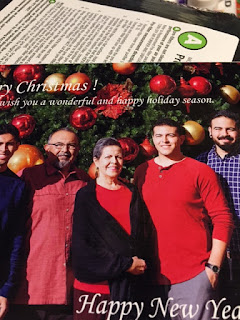 This is the Christmas card I received from the Borges -- Becky still looks beautiful to me even though her hair is gray.  She was a beautiful person, and a physically beautiful one!  Always looked elegant to me.  I did learn from her some of the discomfort and downright torture of chemotherapy.  She had so many procedures done to keep her alive.  She had a great spirit and those four men clearly adored her.  I am wishing the very best for them because I think they must be in such great grief right now.

I want to write down all the great things she did so people have a better idea.  I know she loved her students. I see the fact that she put in an electric fireplace as an act of love.  She never had a harsh word for anyone at school. She was soft spoken and perhaps superficially appeared shy and reserved. But she was incredibly strong in her beliefs and actions about how people should be treated and how things should be done.

Becky and I took a special vacation (for me it really was) to Sedona, Arizona. We took an overnight train and reserved a sleeping car.  I found it impossible to sleep but I think she was able to. We arrived in Flagstaff and rented a car which we drove to Sedona. We stayed in a beautiful place on the outskirts that was situated on a river.  Each of us had a massage in an outdoor massage platform (with curtains).  I hadn't really taken a vacation like that before.  We toured the area and the guide explained to us the reasons why the earth there is so red.  I have some photos but now wish I had taken more.  I know I never would have done that if Becky hadn't asked me.

Over time we had lunch at her favorite restaurants, not far from her house.  I really enjoyed our outings. She spoke so lovingly about each one of her sons - Carlos, Ricardo, and Victor.  As I said earlier, my memory is not that good. So sorry that I did not take notes, did not make a recording of her life story, which to me showed the courage and strength that she always exhibited.  She was a teacher when still still was without papers.  Who would have guessed that this beautiful woman with dignity and uprightness, who had struggled to work, to go to school, to be so beautifully successful was someone "without papers"? 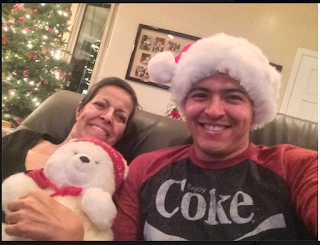 I am hesitating to publish this -- especially as I heard that Becky asked to be cremated and to have no ceremony at all.  While my parents did the same, I wonder how this makes her sons and husband feel?  Perhaps they will do a big family affair and all can talk about how much they love her and miss her.  I hope so.  There is no doubt in my mind that she will be dearly missed by all who knew her, just as my other friends, Scott Folsom, Stephanie Morris, and Kit Kollenberg - are all missed by their friends and family.