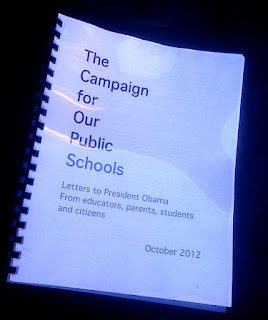 Today I found that Diane Ravitch and Anthony Cody have sent the 400 or so letters to Obama that they collected this month.  We of course had hoped there would be many many more. They were accompanied by the petition to Dump Duncan which I think has 6000 signatures.   While some may feel this is not a good time to approach and reproach Obama since he is running a seemingly close race against Romney, others feel that in fact he needs to know how teachers feel betrayed by him and the class he seems to represent.  He has furthered the cause of privatization of our schools, high-stakes testing, value added assessment of teachers, and more.  He and Duncan are destroying our public schools and of course, leading to the destruction of our unions.

I was also honored to find that my favorite blogger, Fred Klonsky, published my letter on his blog today.   He is so thoughtful, humorous, artistic, talented, intelligent, and more.

The letters can be accessed here.

Here is my letter:

Letter 1
October 17, 2012
President Barack Obama Dear Mr. Obama:
I am a retired teacher and teacher librarian, a mother, and a grandmother. I have worked in education for forty years. I attended all public schools in Los Angeles and went on to a fine public university for both undergraduate and graduate school. I have seen our schools go from places of nurture and caring that provided every subject a child needs, to essentially institutions that teach to the test and discourage creativity. As a teacher I chose to work in the areas of Los Angeles that were considered most dangerous and poverty-stricken. I felt that I was needed there more and I could do the most good.
So far you and your education secretary Arne Duncan act as if most teachers are lazy and unable to teach our students. I find this shocking and outright treasonous. You are judging something about which you know not. Neither you nor Arne Duncan have any idea what it is like to teach in most of our inner city schools. Neither you nor Arne Duncan attended any of these schools, much less rubbed shoulders with the students who are struggling just to get through the day. And, therefore, you haven’t seen what teachers do to keep our students in school, to try to reach them, help them with problems that are beyond monstrous in some cases. We encounter children who are homeless, victims of physical and sexual abuse, victims of neglect, and more. Our children are in neighborhoods where they encounter drive-by shootings and murder. Getting from home to school and back again is a torture.
We are lucky if our students can read by third grade. We are really fortunate if their parents taught them well in their first language so that learning a second language is much easier. Most of the time our students don’t have time to read a book, don’t have parents who can take time off from their two or three jobs to take their children to the library. And they certainly don’t have enough money for a home library.
Do you look at the statistics? Do you see who does well in school and who doesn’t and WHY? It isn’t because we can’t teach. The same teachers teaching the high scoring students are teaching the ones who score the lowest. And often these are the best and most caring teachers. Otherwise they would have gone to a private school at LOWER PAY to get away from the poverty belt.
More high stakes testing, more teaching to the test, and more stunted classrooms with 45 students in them, no art, music, PE or libraries – these conditions will not raise the level of our students. They will do the opposite.

Listen to the experts in Finland. Look at what they do and how they value their teachers. And begin to implement some of THEIR policies and see if our children don’t do better.
But first of all, address the need for decent jobs for our students’ parents, and the need to adequately fund our schools and libraries. Speak to the real pressing needs of our country; stop waging wars in other lands and sending drones to kill innocents. Stop giving money to bail out the banks and start hiring people to rebuild our bridges, roads, schools and parks. Put the money where it is going to benefit the majority and not the 1%.
AND MOST OF ALL, LISTEN TO REAL EXPERTS IN EDUCATION!
They will tell you what I am telling you in this letter, only more eloquently.
Joan Kramer
40- year educator
Haven’t stopped fighting yet

I hope other teachers will write the President and keep up the fight for our schools, our students, our unions, our communities, and our future.
Posted by turtlelearning at 6:29 PM No comments:

On July 17th I was taking a Google research class and learned how to research "news" by confining the search to any date I wanted.  In doing so I came across a great photo of my father testifying at the Senate Internal Securities committee -- before Rep. Richard Nixon, I believe -- about his work in the New Deal and his ties to "communism".   Meanwhile, after finding several "news" references to my father and his "comrades" Nathan Witt andJohn Abt, all of whom worked for the Agricultural Adjustment Administration in the 30's, I casually entered my father's name in the Web search box.  Strangely enough, a story came up that astonished me.  My father wrote the original health bill in 1947 for Senator Claude Pepper of Florida that sadly wasn't passed, but that somehow is linked to Obama's health care plan.  A right-wing ideologue published a book about Frank Marshall Davis, a friend of Obama's grandfather, who this ideologue says was Obama's mentor in Hawaii when Obama was TEN YEARS OLD.  So because this man was a "communist" and knew Claude Pepper, he must have told Obama about Dad's "socialized medicine" healthcare bill.  What is the Sir Walter Scott quote-- "Oh what a tangled web we weave when first we practice to deceive!" Clearly these right-wing ideologues are so intent on discrediting Obama that they will say anything without foundation.  This man even admits he has no proof.  But meanwhile he writes an entire book.  Oh what a scary world we live in!!  Here is a website that "proves" Obama's tainted ties to caring about humanity.  Please don't believe these people.  The majority of developed countries in the world have "socialized medicine".  In fact, Obama's health care should be single-payer health care.  In fact, this is what these right-wing ideologues truly fear -- real health care for all.
Posted by turtlelearning at 2:09 PM 3 comments: 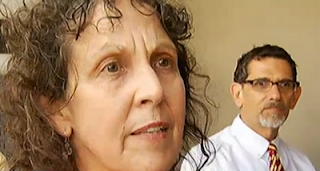 May 8th - attended a LAUSD Board Meeting to protest cuts to libraries, nurses, counselors, psychologist, etc. etc. etc.  Sat through two and a half hours of a staged presentation by so-called Dr. Sleasy Deasy.  He literally hired a local group to come and support him in cutting the hours and credits and teachers required for graduating from high school.  He also required that students earn a "C" average whereas formerly a "D" would do.  Only La Motte and Kayser argued against him.  The community group was the scariest of all because they were voting against their own children.  Clearly Dr. Sleaze wants to cut out kids who are failing so that the LAUSD scores will go up.  He wants to cut teachers and destroy the union so he can hire all Teach For America idiots.  This has to be the most destructive person who has hit LAUSD.  And this is because Monica Garcia and other board members took money when asked to make Deasy the sleaze ball head of the district.  DUMP MONICA is our first task to fight this.  We must change the forces on the Board and get people such as Kayser and La Motte -- the only ones who vote for teachers and students.  Here is a link to my speech that got caught on TV somehow.  I was just expressing my outrage at Deasy and the news picked it up.  Tokofsky said it best:  Deasy does a "fire, ready, aim" rather than studying what is really needed.
Posted by turtlelearning at 1:39 PM 2 comments:

Last time I wrote it was June 2011 after the inquisition of my Teacher Librarian colleagues by the LAUSD lawyers.  Starting this Monday, April 23, my friend will once again be interrogated by the lawyers in a hearing to defend their right to keep their jobs, or any job for that matter.  The district has decide not to fund:  any Libraries, any Adult Education, any Pre-K programs, and much much more. 11,000 teachers apparently received the notorious "pink-slip". 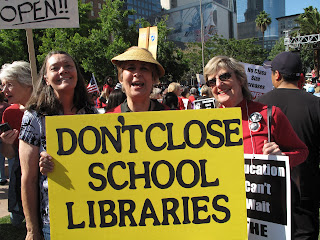 The scary part this time is that our new Superintendent John Deasy is such a bully that no one has planned any actions, no one is sending letters, no one is speaking out except for a few isolated demonstrations on behalf of Adult Educ. or Pre-K.  This is not a way to win.  But Deasy et al have threatened to use any action or writing or speaking out against an employee.  He has already proven what a bully he is when he entered the classroom of a substitute teacher and didn't like what she was doing and said so. She politely asked him to leave.  He fired her immediately.  Substitutes have little protection.  Outrageously Deasy had the nerve to show up at the free screening of the movie "Bully" shown to 6000 LAUSD students.  I guess being top bully he should have had a lot to say.  He constantly lies and changes direction to suit his needs. After all, he purchased his PhD.  What does that say about him or about Monica Garcia who chose him along with her Gates/Eli Broad lackey friends.  Recall Monica Garcia is in full swing right now.  We need to elect at least one more decent educator to help Bennett Kayser and Marguerite LaMotte defeat the forces of privatization.
Posted by turtlelearning at 5:20 PM 1 comment: